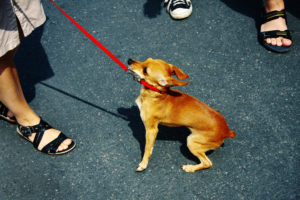 Dogs that rush the door, bark, and threaten strangers benefit from counter-conditioning. Essentially, we help the dog associate strangers with things he appreciates, like food. If the stranger does nothing to frighten or upset him, the dog will connect interactions with people he does not know with an abundant delivery of food he loves.

1. When a stranger arrives, put the dog on a leash and take him outdoors. Do not allow the dog to rush the stranger. Coach the stranger to avert his gaze and refrain from petting the dog. Take a brief walk away from the home.

Why? It is often productive to meet the stranger on neutral territory, rather than in the foyer of the home. Doing something together, like a short walk, redirects the dog’s energy into a task and may serve to incorporate the stranger into the pack.

2. When you return home, keep the dog on a leash and move away from the foyer. Sitting at a table may defuse tension. Coach the stranger to avert his gaze and refrain from petting the dog. You and the stranger should drop treats near the dog, who should be as far or as close as he may be and still eat food. (If the dog does not eat, offer better treats and/or increase the distance the dog is from the stranger.) Decide in advance how long the interaction will last (5-10 minutes), then remove the dog and take him to another area of the home. Let the dog rest for a few minutes.

3. Return the dog to the previous area and recommence feeding him in the presence of the stranger. After a few minutes, remove the dog and let him rest.

4. Repeat for a third trial. Most dogs do well with three trials of 5-10 minutes each, although this may vary.

* Include other family members as handlers as appropriate so that the dog is treated consistently by all in the presence of strangers.

* Overhand touching and petting the dog on the top of the head are not allowed.

* Learn your dog’s body language. Forward ears and an erect tail predict arousal that may result in a muzzle punch or bite, as do flattened ears, panting, and a tucked tail. A professional dog trainer can help you learn to read your dog’s cues so you may keep others safe and help him make progress.

* Counter conditioning is an emotional journey, not an intellectual one. The dog does not have to Sit, Leave it, etc. Interactions in which the dog appears bored, settles, lies down, etc. are good experiences.