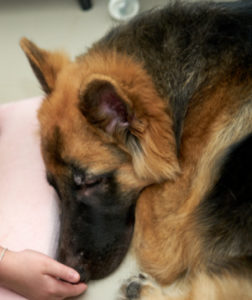 People often say hello to dogs in ways that are confusing or threatening, especially when they stand over and reach for them. Many dogs don’t like being touched on the top of the head. If a dog is afraid of people, overhand petting should always be avoided.

Fearful dogs benefit from the option to say hi on their own terms. When friends and strangers present the palm of the hand, or more commonly, two fingers facing up (as if in a closed Peace sign), under the nose as a greeting, the dog may elect to bump the fingers with his nose or not. Dogs who choose not to bump the fingers should be allowed to forego the greeting.

Dogs who choose to bump the fingers have just said hi, and do not need to be petted or touched unless they indicate they want more interaction.

1. Extend two fingers about six inches in front of your dog’s muzzle, slightly under the chin. Most dogs are curious and will touch the fingers with their noses. Say “Yes” and give the dog a piece of food. Repeat until the dog extends his nose towards the fingers readily.

2. Move the fingers so they are in slightly different positions — to the left, right, further back or down, etc.

3. To teach your dog the word for this behavior, say “Touch,” then put out your fingers. Yes/treat when your dog bumps the fingers.

Take the command on the road

When strangers ask to pet your dog, you may always decline.

However, if you’d like to proceed, tell the stranger to put out his palm (or two fingers), just under your dog’s chin. You may say “Dog Name, Touch,” or you may find your dog moves his head forward willingly. Yes/treat and praise.

If your dog declines to touch the stranger’s fingers, accept that he does not want to greet the person.

Dogs older than two years old and in need of remedial socialization may appear reluctant to greet new people. You will make more progress by feeding these dogs something delicious at a safe distance from strangers than by forcing an unwelcome interaction.