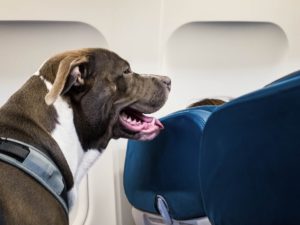 New proposed rules from the United States Department of Transportation (DOT) that seek to clarify Air Carrier Access Act (ACAA) regulations regarding the transportation of service animals by air and that are intended the ensure that America’s air transportation system is safe for the traveling public and accessible to individuals with disabilities, are expected to be published in the Federal Register by the end of this week.

1. Defines a “service animal” as a dog that is individually trained to do work to perform tasks for the benefit of a qualified individual with a disability.

2. It allows airlines to recognize emotional support animals as pets rather than as service animals.

3. It allows airlines to require all passengers with a disability traveling with a service animal to complete forms attesting to the animal’s training and behavior, certifying the animal’s good health, and confirming that the animal has the ability either not to relieve itself on a long flight or to relieve itself in a sanitary manner, and submit completed forms to the airline.

5. It allows airlines to set policies to limit the number of service animals that one passenger can bring onboard an aircraft.