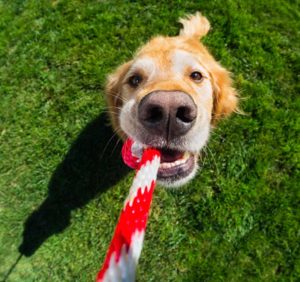 For decades, dog owners have been told never to play tug-of-war with their dogs because it increases aggression in the dog. This isn’t true—every study done refutes the notion. Playing tug-of-war doesn’t turn your dog into a predator; he already is one. The game simply provides a safe and enjoyable outlet for the behavior.

Why it’s a good idea.

A tremendous cardio workout and brainteaser for your dog.
A great way to teach your dog to listen to cues even when excited and distracted.
Exercise that can happen indoors, outdoors, in short sessions, and with little space.
Likely to lessen any behavior problems resulting from under-stimulation and boredom.
A potent motivator for snappy obedience.

Tug-of-war, however, should be correctly trained and always played by the rules. Remember: Control the game and you control the dog. Follow the method and rules laid out here, and you are in for a great time with your dog:

If your dog hoards the tug toy, show zero interest. If, when your dog “wins,” i.e. you let go of the tug toy, he leaves and hoards the toy, play hard to get. Never chase your dog or get into a battle involving speed or agility. You won’t win and psych-outs work much better, so pretend you couldn’t care less.

Notice and reward steps in the right direction. If your dog tries to re-engage you in the game by dropping the toy in front of you, praise him and try again. The goal is for your dog to learn that the tug toy is infinitely more fun when brought to life by you than when dead. Patience is key here, especially with inveterate hoarders.

Put the release on cue.

Decide on a release cue such as “Out,” “Give,” or “Let go.” Before getting your dog excited about playing tug for the first time, practice some low-key exchanges with him. The sequence is:

If your dog doesn’t take the tug toy in his mouth to begin with, practice the exchanges anyway. Give him the toy (put it down in front of him) and then take it back, give the reward, and then replace the toy. Rehearse dozens of reward-for-toy exchanges. The release should be well trained before you continue with the game. (If your dog becomes possessive about toys, call us for advice). Once your dog begins to engage and tug, allow him to win. Don’t tug too hard, or for too long. Let him develop confidence and zeal for the game. Service dogs in training (who will have to open doors, for example) should be given latitude to develop a strong tug. They will need lots of confidence to perform the mobility tasks that tug serves.

If your dog grabs the toy and runs away, instead practice the exchanges without completely letting go of the toy. The important thing is that your dog experiences having something taken away, getting a reward, and then having the thing presented to him again.

If your dog won’t let go of the toy with a bit of encouragement, try first having him sniff the food treat. Once this has worked a few times, hide the treat and try again. If your dog is reluctant to release, reward every exchange until he releases without hesitation on the first cue every time. Eventually, getting to take the toy again will become the reward for releasing on cue, but using food early on helps break your dog’s focus on the toy. Experiment with a variety of different food treats if your dog is very reluctant to part with his tug toy.

Every game has penalties.

A 30-second time out. For any failure to release the tug toy, stop play and leave the room for 30 seconds.
End the game. For a game misconduct like grabbing your clothes or your hand with his mouth, stop the game altogether.
When your dog knows, loves, and is hooked on tug-of-war, ending the game abruptly is by far the most potent motivator against rule breaking.

1. Your dog has to release the tug toy on cue.
Of course, you have thoroughly trained the release cue, so any failure to comply should result in a time-out penalty.

2. One tug toy only—and the game only happens when you say so.

Designate a tug toy as the one-and-only tug toy, reserved for this game and nothing else. Then decide on a take cue like “Get that rope!” This rule prevents your dog from misfiring in day-to-day life: you don’t want someone innocently picking up a tug toy and being enthusiastically jumped by your dog and you don’t want to have him grab some other thing you are holding because he thought he heard the cue.

The easiest way to train this rule is to practice it while playing. If your dog goes for the toy before you have invited him, give a No Reward Mark (“Oh! Too bad!”), and do a time-out followed by an obedience break (see next rule). Then invite your dog to take the toy.

This rule infraction is extremely common in tug-of-war games, so don’t sweep it under the rug. If your dog goes for another retake before being invited, i.e. makes the same mistake twice in a row, end the game.

Tug-of-war is one of the great recyclable rewards for obedience training. Alternate back and forth between the tug game and obedience to spot-check your control over your dog during the game and to teach him obedience when he is excited and distracted. Every initiation of the tug game is a potent reward you can use to select a particularly nice obedience response. Your dog will try fanatically hard to improve his obedience to get you to restart the game. What’s more, through repeated association over time, the two activities will blur in your dog’s mind, eventually making him love obedience training.

Your dog will sometimes make contact with your hand or other part of you by mistake. Sometimes he might even latch on to you or your clothing as though you were a tug toy. Don’t let this go unnoticed. Screech “Ouch!” even if it didn’t hurt and abruptly end the game. This is game misconduct every time. Dogs can control their jaws with great precision if given a reason to do so.
With this rule you not only remind your dog of the sensitivity of human skin and the great necessity to keep his jaws off people at all times, you have also trained this while he is excited, which is where sloppy jaws are most often a problem.

That’s it. Now have fun with it.

If your dog isn’t breaking any of the rules, let him get as excited as he wants. This includes head shaking, strong tugging, and growling. (But maintain the rules through constant practice and testing.)